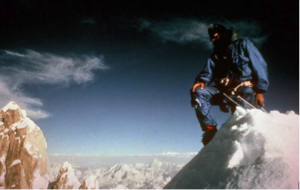 ‘A Crawl down The Ogre’ talk by Doug Scott CBE

Forty years ago Doug Scott CBE and that other icon of mountaineering, Chris Bonington, made the first ascent of The Ogre (7285 m) in the Karakoram. Their climb extended the boundaries of what had been achieved before at that altitude. But it was the subsequent descent from the summit in the dark, turning a catalogue of disasters that would have defeated most people, into an epic which has since entered mountaineering folklore.

With the aid of newly discovered photographs and diaries, Doug Scott will be telling a thrilling tale of hard climbing, team work and survival against all odds, in his famously laconic and humorous style.

Doug slipped on the abseil below the summit breaking both legs just above the ankles and losing his spectacles and ice axe. He and Chris were forced to spend the night on a snow patch, warding off frost bite. Storm and starvation and days of crawling on hands and knees followed but they had to carry on regardless before losing all their remaining strength. Chris abseiled off the end of the rope, smashed his ribs and later contracted pneumonia. With the selfless help of Mo Anthoine and Clive Rowland, it took them eight days to reach Base Camp – but the adventure did not stop there. It was another 24 years before The Ogre was climbed again. 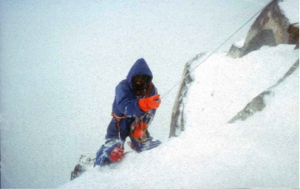 Each evening will include a sale of Nepalese goods, cards and posters and will be followed by an auction of signed framed mountaineering prints, all supporting the post-earthquake reconstruction work of Community Action Nepal www.canepal.org.uk. Doug will also sign copies of his award-winning autobiography Up And About.

Chris Bonington will be joining Doug on stage at Oxford, London and Birmingham in November and signing copies of his eagerly awaited autobiography Ascent which is being published in mid-October. The Oxford talk has already sold out and people interested in hearing these mountaineering legends speak together might consider purchasing tickets for London or Oxford.