Guinness World Record for the highest game of hockey ever played!

Congratulations Hockey for Heroes and Lincoln Minster School for Obtaining a Guinness World Record for the highest game of hockey ever played! 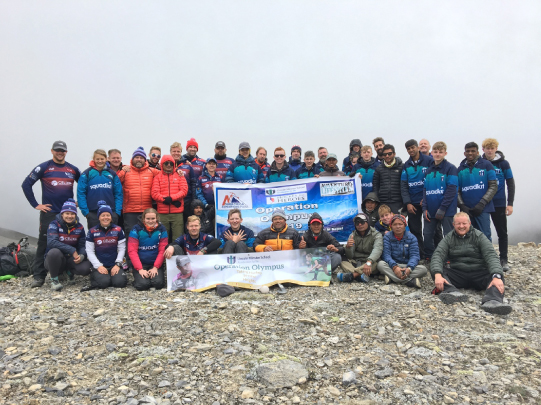 A team from Hockey for Heroes and pupils from Lincoln Minster School set out on a life-changing adventure to Nepal with a challenge to set new Guinness World Record and create a lasting hockey legacy in local communities and Schools. The idea originated from a collaboration between Tom Eves of Lincoln Minster School and Gary Johnson from Hurricane Sports. Unfortunately, Gary was unable to complete the trip as he was experiencing symptoms of concussion after a fall. After arriving in Nepal, the group trekked for over 40 hours and more than 32 miles in challenging conditions to ascend the Annapurna Pass to its highest point.

Physical and mental challenges along the way put the trek in constant jeopardy, including arduous road networks, landslides from intense rainstorms, heat sapping hiking, and with only half the oxygen levels… altitude sickness. The group pushed through to ascend the route that eventually lead them to Thorong La, the highest point located at over 5000 meters above sea level.
Against the beautiful backdrop of the Annapurna Mountain Range, the group battled against reduced oxygen levels and extreme tiredness to play a 60-minute game of hockey, hoping they had done enough to set the world record.

“Battling the altitude and fatigue was a struggle, but I’m very proud to have been part of the group, leaving a legacy for hockey in such a beautiful, vibrant country and reciprocating the fantastic hospitality provided by the Nepalese people.” Andy Halliday, Great Britain Men’s Team Manager and Hockey for Heroes and Lincoln Minster Sports Ambassador.
To ensure the group left a hockey legacy, they stopped off at several locations throughout the trip to donate hockey equipment and deliver coaching sessions to local community members and Schools. Over 100 community locals from Mutkinath, played games and learned tricks from the group, whilst a visit to the Shree Janahit Secondary School, in Jomsom, provided students with the opportunity to be coached by group members before taking part in an organised tournament.

“It has taken a group from Great Britain to take hockey to the mountains to show us how our beautiful country may become a centre for success in extreme sports and challenges. It is now our turn to follow their example”, Himal Khadka, The Vice President of Hockey in Nepal.

The group’s community efforts resulted in hundreds of children getting to play hockey for the first time, with many displaying an abundance of energy and excitement while using their hockey sticks and wearing playing shirts, including sticks, shirts and kit donated by GB Hockey squads.

“An emotional and physically exhausting adventure that changed the lives of Lincoln Minster School pupils, Hockey for Heroes members and 100’s of Nepalese people! Friendships formed through adversity to create a group with its heart set on leaving a legacy of hockey in Nepal and setting a world record. This is a remarkable achievement that will be difficult to replicate.” Tom Eves, Lincoln Minster School.

The H4H (Hockey for Heroes) team raised funds for the H4H charity while Andy Halliday dribbled a hockey ball for the whole trek, raising money for young Lewis Whele who suffers from Cerebral Palsy.

About Hockey for Heroes

Using field hockey as our sport, Hockey for Heroes raises funds for Help for Heroes. Our efforts date back to 2012 and encompass a mixture of exceptional physical exertion combined with playing hockey. To date Hockey for Heroes has raised over £250,000 to help support injured service personnel.
About Lincoln Minster School

Lincoln Minster School is a non-selective co-educational day and boarding all through School from 2-18. It is situated in the historical Bailgate area beside the world-famous landmarks, Lincoln Cathedral and Lincoln Castle. Our pupils enjoy an ‘Education for Life’ benefitting from the extensive partnerships the School has with the leading industries and sectors of Lincoln.