Gharials, most distinctive of crocs, are most in need of protection, study shows

KATHMANDU — Something occurred to Phoebe Griffith as she observed gharial and mugger crocodiles in and around Nepal’s Chitwan National Park, she recalls.

Both crocodiles live in the same environment, and from the neck down they’re everything one would expect a crocodile to look like. But the similarities end there.
“Gharials are critically endangered, they are mostly aquatic, big-sized (believed to be) fish-eating crocodiles that live mostly in the river,” says Griffith, a conservation biologist at the Zoological Society of London. Muggers, which are smaller, prey on a wider range of species, she says. “Muggers can also dig burrows to escape periods of bad weather, but gharials can’t,” she adds.

The distinctive traits and behaviors of gharials (Gavialis gangeticus) and muggers (Crocodylus palustris) benefit not just themselves, but also the ecosystem in general. For example, fishing communities living in areas where gharial populations have increased have reported improved fish stocks as the crocodiles prey on the big fish that would otherwise feed on their preferred catch species. Similarly, the burrows made by muggers have been found to be used by other animals as well.

Griffith says this led her to think about the diversity of the 28 crocodilian species that exist around the world today, and the different ecological roles they play. So she decided to explore it further. 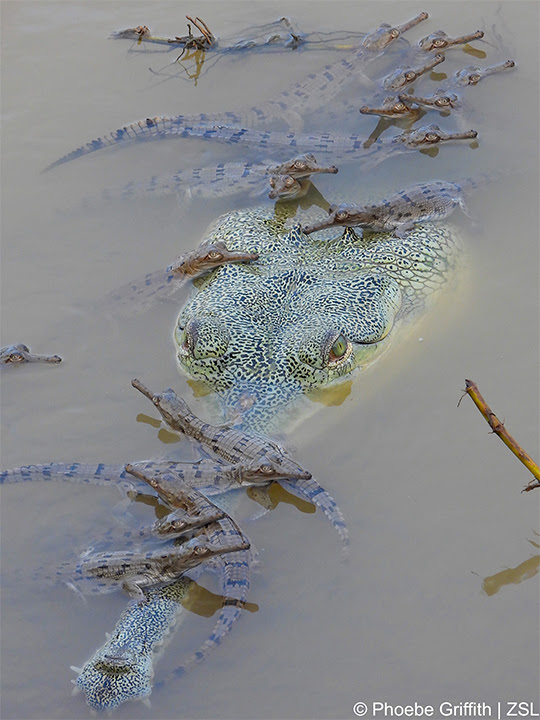 A female gharial guards a creche of hatchlings in Nepal. Image courtesy of Phoebe Griffith/ZSL.

The results were published recently in the journal Functional Ecology, in which Griffith and her colleagues built a global trait database for all existing, or extant, crocodilians. They looked at measurable characteristics linked to how each species functions in its environment, such as skull shape, body size and habitat use, and assigned scores based on the traits that influence one or more aspects of their functioning in the ecosystem and their uniqueness in an evolutionary sense. The team then identified four functional groups of crocodilians that had similar ecological roles. However, the gharial, because of its distinctive ecological functions, stood out and didn’t fit well into any of the groups.

The researchers then combined these “functional diversity” scores with the level of threat each species faces, to develop a metric to guide efforts to prioritize species for conservation.

“We used data from the IUCN Red List as well as data from ongoing assessments of crocodilians around the world,” Griffith says. Gharials scored the highest on this new metric, known as EcoDGE, or ecologically distinct and globally endangered, followed by the Chinese alligator (Alligator sinensis), of which fewer 100 are left in the wild.

“We found the gharial was the most functionally distinct species, the species with the most unusual ecological role,” Griffith says. “The loss of the species would mean there’s nothing like gharials in the world today.”

Gharials, known for their long slender snouts that end in a comically bulbous nose, were once abundant in the Ganges River Basin that runs through Nepal and India. Today, they’re limited to a handful of tributaries, and are threatened by fishing, changes in river flow due to dams, and poaching. 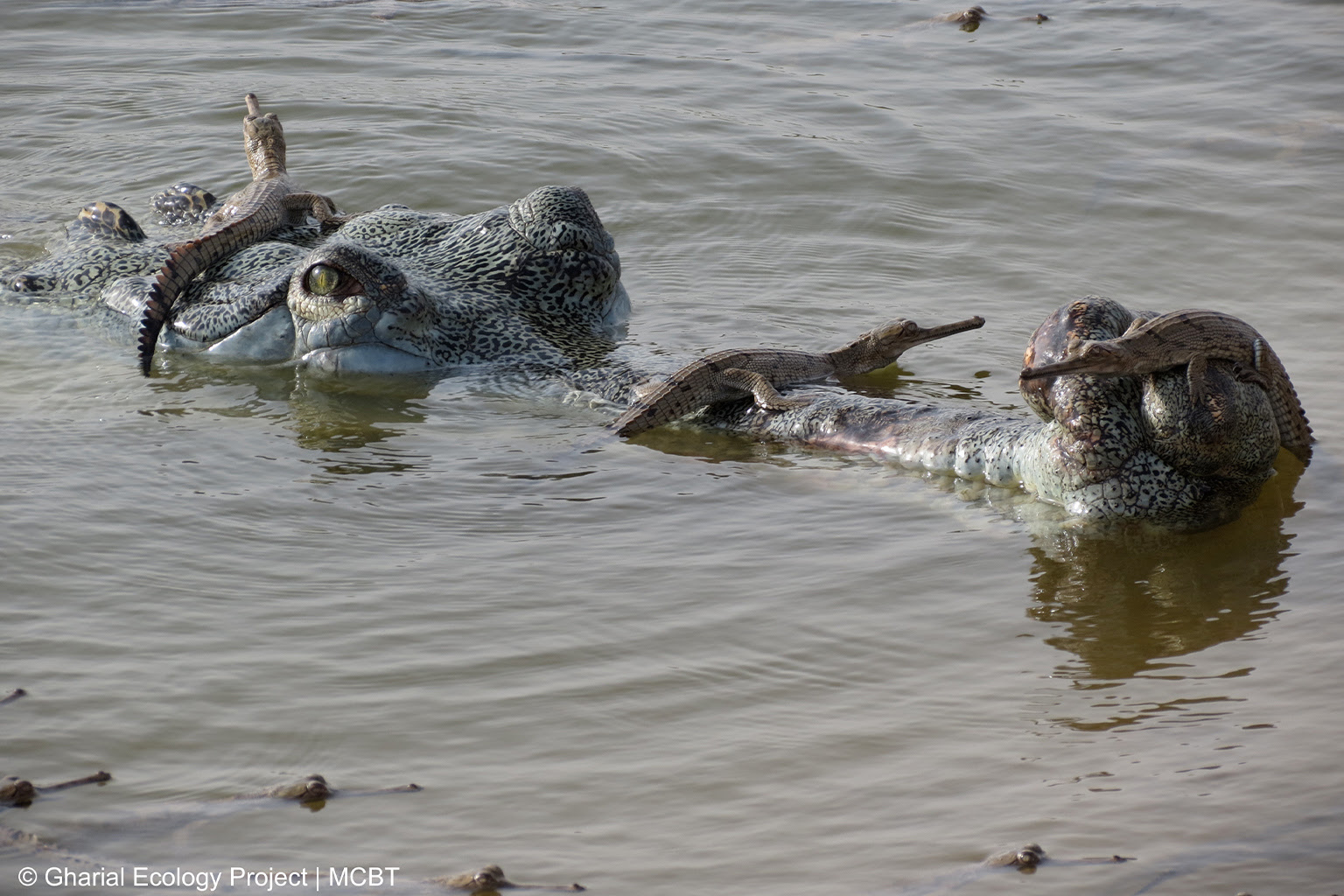 A male gharial guarding hatchlings. The study found the gharial was the most functionally distinct species, the species with the most unusual ecological role. Image courtesy of Gharial Ecology Project/MCBT.

Fewer than 200 breeding adults are believed to live in the wild in Nepal. Since 1978, Nepal has run a program to raise gharial hatchlings in captivity, in an effort to boost the wild population. Officials in Chitwan and Bardiya national parks collect eggs from riverbanks, provide a suitable environment for them to hatch in, and feed and raise the young gharials until they’re around 5 years old, at which point they’re released into the wild.

The study authors note that under current extinction scenarios, based on the IUCN Red List assessment, 32-38% of crocodilian functional diversity might be lost within a century. The figure increases to 48% if all threatened species, including the gharial, go extinct.

The authors say the findings provide an important blueprint for prioritizing conservation of crocodilians worldwide.

“Our research shows that we can safeguard much of the diversity we stand to lose by prioritizing the most unique species for conservation action,” said co-author Rikki Gumbs, from the ZSL’s EDGE of Extinction Programme. “Interestingly, we can also efficiently protect the threatened functions of crocodilians by aiming to conserve their evolutionary history. In essence, by looking to the distant past we can effectively conserve crocodilian diversity, and the benefits this diversity provides to ecosystems, into the future.” 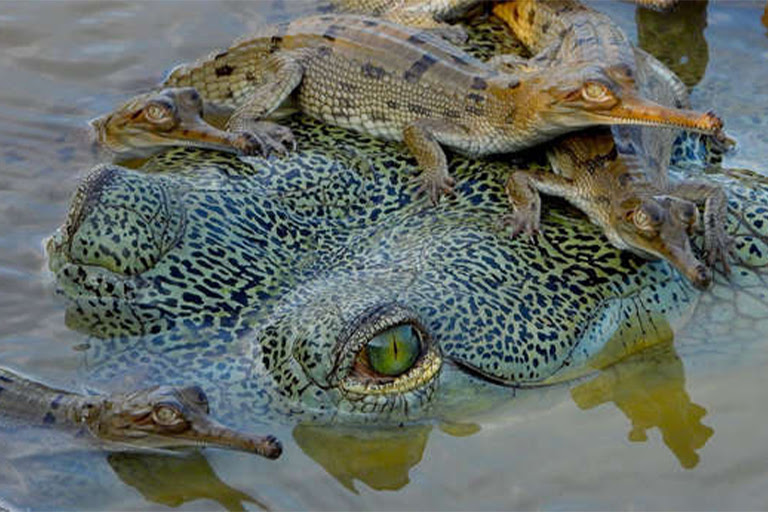 Fishing communities living in areas where gharial populations have increased have reported improved fish stocks as the crocodiles prey on the big fish that would otherwise feed on their preferred catch species. Image © Phoebe Griffith.

James Perran Ross, vice chair of the crocodile specialist group at the IUCN, the global wildlife conservation authority, who was not involved in the study, says the study provides a unique approach to conservation. Until recently, he notes, researchers focused on individual species of crocodiles and studied their behaviors and threats and challenges in isolation. The study led by Griffith, for the first time, looks at crocodilians from a different perspective, Ross says.

“We have had this conversation in crocodile conservation for a long time on how to prioritize conservation work with the limited resources we have,” he tells Mongabay. These range from prioritizing the rarest species, to focusing on those facing the greatest threats,, to protecting those considered as umbrella species, Ross adds.

“As they are also the ones on the IUCN Red List,” he adds, “I would say the study presents a new way of slicing the cake.”